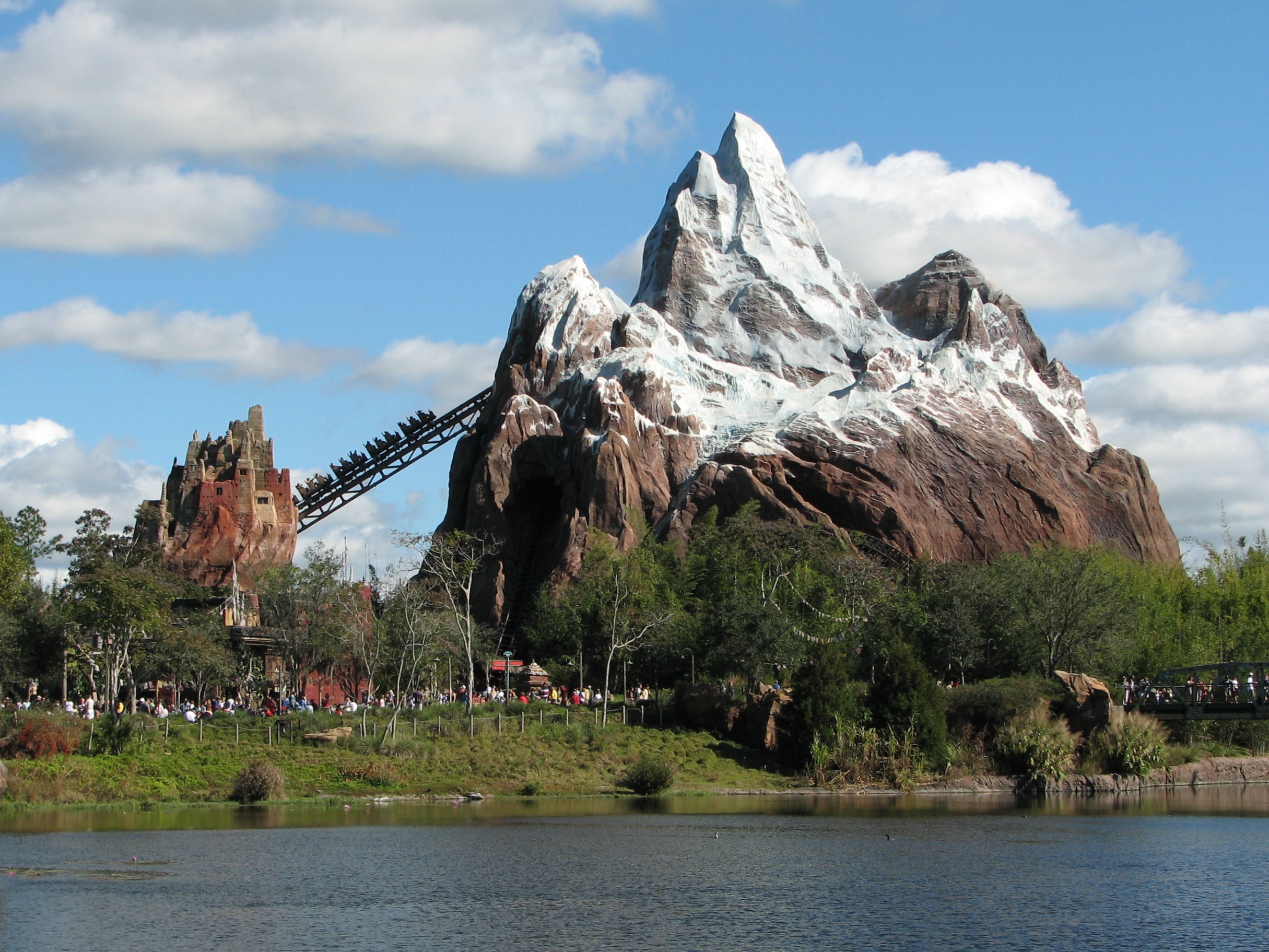 The mountain loomed above me, its jagged, icy peaks resembling the teeth of some fearsome beast. From somewhere on the mountain I could hear the screams of previous expeditions, brave souls who had dared to go in search of the summit. A knot of fear formed in my stomach, but I knew that waiting would only make things worse. It was time for me to conquer Expedition Everest…

Located in Walt Disney World’s Animal Kingdom, Expedition Everest is one of the park’s marquee attractions. It’s a wonder of Imagineering, mixing authentic cultural detail with imagination to transport Guests into the beautiful world of the Himalayas.

Named for the world’s largest mountain, it’s only fitting that Expedition Everest is the tallest attraction in Walt Disney World. Standing 199.5 feet tall, the coaster dominates the landscape of Animal Kingdom. Oddly however, the mountain Imagineers created is not, in fact, Mt. Everest. It’s a completely fictional peak called the Forbidden Mountain.

The attraction opened in 1996. At the time, it was the most expensive roller coaster in the world. According to the Guinness Book of World Records, the coaster cost $100 million dollars. It held the record until 2019, when a coaster at another park surpassed it with a coast of $300 million dollars. Not only is Expedition Everest massively tall, it required an unbelievable amount of materials to build. The attraction apparently consists of 1,800 tons of steel, 18.7 million pounds of concrete, 2,000 gallons of stain and paint, and 200,000 square feet of rock.

The Expedition Everest experience starts well before you enter the attraction queue. It’s such a tall attraction that it can be seen from multiple spots in the park. One of my favorites, and one of the most picturesque, is from the bridge between Discovery Island and the Africa portion of the park. If you’re looking for a perfect photograph, I think that’s as close as you’re going to get. However, if you are looking for a PhotoPass picture, a Disney Cast Member is typically available on the bridge between the exit of Expedition Everest and the Finding Nemo the Musical building.

To reach the Forbidden Mountain, Guests must first travel through the fictional kingdom of Anandapur (a word which means “Place of Many Delights” in Sanskrit). Prayer flags hang across walkways, fluttering in the breeze and you can even spot a location “selling” hiking backpacks and other gear near the Expedition Everest queue. The theming in the line is just as immersive. It is filled with authentic items shipped from Asia such as statues of the Buddha. You’ll also see articles and books about the mysterious Yeti who is rumored to guard the Forbidden Mountain. There’s also various hiking and expedition gear scattered through the queue. It’s at this point that a Guest (such as myself) might begin to worry about the potential dangers of the journey ahead of them.

Fortunately, my intrepid readers, I did not lose my nerve. After all, I’ve survived the Jungle Cruise and the perilous Star Tours. No mountain monster or rickety track was going to scare me away.
The journey up the Forbidden Mountain begins when you climb into your train car. At this point, it’s too late to back out. Just prepare yourself to scream a lot and you should be fine. The coaster reaches a max speed of 50 miles per hour, and you’ll travel both forward and backward on your trip. The only thing that might make things scarier is if some mysterious creature somehow managed to destroy the track your train is travelling on…

Part way through the ride, a mysterious creature destroys the track you are travelling on. Your train races toward the mangled bits of steel before stopping just in time. The horrors haven’t ended yet though. There’s still the Yeti. Standing at an enormous twenty five feet tall, he is the guardian of the mountain. One of the most impressive audio animatronics ever created, the Yeti has two modes, known as “A Mode” and “B Mode.” In the “A Mode,” the giant beast takes a swipe at Guests as they race by. However, technical difficulties mean that the Yeti has been in the stationary “B Mode” for some time now.

If you happen to survive the Yeti’s wrath (which I fortunately did) then you will find yourself at your journey’s end in short order. It’s an altogether thrilling experience and there are bathrooms nearby in case you need to change your shorts. Not that I know from experience.

Enjoy the magic of Disney all year ’round with Celebrations Digital Magazine!