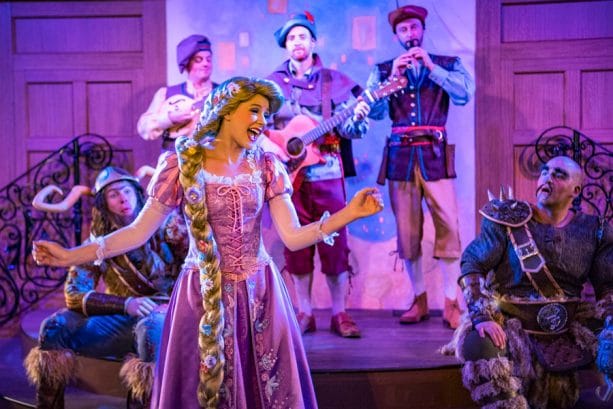 When it comes to what defines our favorite Disney characters, so many attributes come to mind:  personality, quirks, ensembles and of course, the hair! As a hairstylist myself, I have often chuckled at the Disney princesses, princes or just characters in general I have been shown a Google image of with the hopes of replicating on a client. The most common one, believe it or not, being sergeant Calhoun from Wreck-it Ralph! While most Disney royalty has perfectly coiffed, every strand in place, hair (and we’ll certainly mention a couple of our favorite princesses!) some of the styles that  a beloved character possesses are a little bit… out there! From Princesses to side kicks, here is a list of six of my favorite Disney characters and the hairstyles that define them.

There’s no way this lost princess isn’t on the top of our list! The title of the movie in which she stars literally refers to the piles and piles of hair on top of her head. In fact, the entire story is centered around Rapunzel’s hair and the magical powers it possesses – it’s the reason she was abducted in the first place! Not to mention that thick, floral decorated braid that can hoist friends and family into the tower. Talk about a headache! But as gorgeous as those golden locks are, Punzy is just as stunning as a short haired brunette. 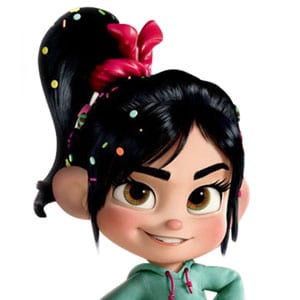 While not technically a princess, Vanellope von Schweetz is royalty in my book! The kid’s hairdo may appear to be your basic ponytail with a soft fringe, but the sweets are in the deets, as they say! (I’m paraphrasing, of course…) V’s silky, jet black pony adorned with peppermint swirls  and colorful sprinkles, topped off with a twizzler hair tie is enough to make anyone have a sweet tooth – and foreshadows how the story will end! The perfect coif for her delightfully jovial personality. 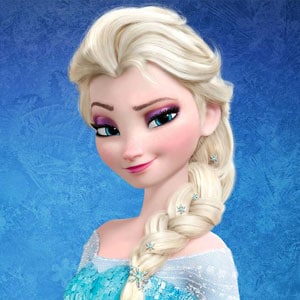 One of the many delightful things about Queen Elsa’s style (hair and otherwise!) is that it’s always changing. Who can forget that immortalized stomp in her ice castle during the climax of ‘Let it Go’? It’s not just the change in scenery, her outfit and entire demeanor that transforms –  Disney fans everywhere lost it when the pinned up, in place braid fell at her shoulders to a messy, soft dutch (or in this case, Arendelle-ian) braid. A perfect example of ‘change your hair, change your life’.

This isn’t your everyday topknot, but then again, Rey isn’t your everyday heroine. Training to be a Jedi? Attempting relentlessly to fight off a hunk-y supervillain (with whom you have a powerful connection to) with every fiber of your being? Then you’ll probably want to try this triple bun ‘mohawk’ topknot that inspired a look called the ‘mom-hawk’ a few years back!

Any version of the Mad Hatter will do, but what first jumps to mind for me is the eccentric oddball character played by Johnny Deep in Tim Burton’s Alice in Wonderland. The goofy grin, mismatched attire, and zany eyes are defining enough; but add on to that a bushel of unkempt orange curls finished with a colorful tophat and you have a delightfully tacky look you can’t (and don’t want to) unsee!

Is there any one character in Disney history that is so easy to love other than Genie? While most of us have a sacred attachment to Robin Williams (rightfully so!), Will Smith also won us over in the live action remake with his very own version of this beloved sidekick. As different as these two Genies are, there is one thing that wasn’t altered during the transformation. You guessed it, the hair! Much like the aforementioned Ms. Von Schweetz, there’s really knot much to it (get it?) Just a simple black ponytail, wrapped in a gold hair band. But if we dare to go off the rails a bit and delve into facial hair, Genies chin strap with a curly cue at the bottom is an equally defining look.

Disney does such a phenomenal job of detailing the physical attributes of our favorite Disney friends, and they certainly haven’t fallen short on the hairstyle game. In the salon, ‘the Elsa braid’, growing your hair out ‘Rapunzel long’ and the ‘Genie topknot’ are commonplace to throw around when communicating a desired style. The fact that Disney as a brand has so much influence over how we choose to define our own look speaks volumes. Next time you watch an oldie but a goodie Disney film, or even as the new Disney, Pixar and Marvel movies are released, be sure to keep your eyes peeled for those defining hairstyles that just might motivate you try a little something different with your own look.

Enjoy the magic of Disney all year ’round with Celebrations Magazine!