Ten Things You May Not Know About the Monorail

The forerunner of the modern monorail system was tested in Germany in the 1950s, and two of Walt Disney’s Imagineers introduced him to a monorail system created by the Alweg Corporation in Germany in 1958. This system allowed Walt to see the potential for bringing a monorail to his park. Rather than a traditional suspended-track design, the Alweg Corporation had created a unique straddle-beam track with a slender design that would allow the beam to blend perfectly with the surrounding landscape in Walt’s world of “tomorrow.” Walt also loved the combination of electric propulsion and rubber wheels on the beam that produced an almost noiseless operation – preventing distraction for Guests either on the attraction or who were passing nearby. Walt Disney asked Alweg to design the original 8/10-mile beamway around Tomorrowland and enlisted a young designer, Bob Gurr, to design the train. Through the efforts of this collaborative effort, the Disneyland Alweg Monorail System opened on June 14, 1959 as the first, new-style daily operating monorail system in the Western Hemisphere.

Each of the 12 monorail trains in Walt Disney World is identified by its own colored stripe: Peach, Teal, Red, Coral, Orange, Gold, Yellow, Lime, Green, Blue, Silver, and Black.

The entire monorail system contains 14.7 miles of track. Over half that is devoted to the Epcot loop alone.

Just how long is that? Well, since the monorail began operation, it’s made the equivalent of more than 17 trips to the Moon!

At its highest point, the monorail track is 65 feet above the ground. Coincidentally, that’s the same height as the highest section of Space Mountain. (The track we mean, not the building; that’s nearly three times higher!)

Each monorail train is 203 feet long. If you were to string all of the monorails end to end, they would stretch out to more than seven and a half football fields!

8. The Wheels on the Monorail Go Round and Round…

While the Tomorrowland Transit Authority PeopleMover uses a series of powerful magnets to propel the trains forward, the monorail uses tires as you might expect. But just how many? Well, there are 12 load bearing tires, 52 steering/guide tires, and 60 nylon safety wheels per monorail. That’s 124 all together!

Each monorail can accommodate up to 360 Guests, which breaks down to 60 people per car. That’s on a busy day of course. Speaking of busy, roughly 50 million Guests travel on the monorail each year. That’s more than two-and-a-half times the entire population of Florida!

The monorail reaches a maximum speed of 40 mph during normal operations. That’s just as fast as the drop in Splash Mountain, though the monorail is much drier, of course.

What are YOUR favorite monorail memories? Let us know in the comments below!

10 Things You May Now Know About Rapunzel 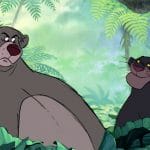 Ten Things You May Not Know About Baloo and Bagheera

Ten Things You May Not Know About Mulan

Five Disney Moments I Will Never Get Tired Of