1. Tinker Bell’s name came from the fact that she was originally a fairy who fixed pots and kettles, just like a tinsmith or tinker. In the original play, she communicated with a tinkling bell sound.

2. Tinker Bell first appeared in the 1904 play, “Peter Pan: or,The Boy Who Wouldn’t Grow Up” by Sir James M. Barrie. In the play, as well as in later depictions, she is seen as kind and helpful one minute while vindictive and jealous the next. Why such disparate emotions? It’s simple, her diminutive size prevents her from holding more than one feeling at a time!

3. Tinker Bell is known for sprinkling pixie dust around, and indeed, pixie dust has become synonymous with magical happenings throughout Walt Disney World. However,pixie dust is purely a Disney creation. In the original play it was merely fairy dust.

4. One of the first pieces of Tinker Bell merchandise ever offered at Disney theme parks was a glow in the dark wand,even though she never actually used one in the 1953 Disney film Peter Pan .

5. Millions have dazzled at the sight of Tinker Bell flying down from the top of the castle before the evening fireworks. This tradition started in 1961 in Disneyland when Tinker Bell was performed by Hungarian-born circus performer Tiny Kline, who was 71 years old at the time!

6. Legend has it that Marilyn Monroe was the inspiration for Tinker Bell, but that’s not true. Her real life reference model was Margaret Kerry, who was also the voice of Spinner and Paddlefoot in the Clutch Cargo  animated TV show.

7. She is currently voiced by Mae Whitman, whose voice work also includes the part of Katara in the animated television series Avatar: The Last Airbender .

8. Tinker Bell was an original member of the Disney Princesses,but it was quickly decided that she was so special that she should have a group of her own, leading to the creation of the Disney Fairies. She is joined by Silvermist, Rosetta, Fawn, and Iridessa. 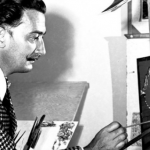 The Unlikely Partnership of Disney and Dali